I think Generation X is probably the most depressed generation. When some news guy writes a book about us it will be called "The Glumest Generation."

So I've been thinking about this--why? Sure, there are more anti-depressants available to take, and they have minimal side effects. Back in the olden times, you wouldn't even tell anyone you were depressed because you saw "The Snake Pit" and you knew about Frances Farmer. Anti-depressants had crazy side effects and contraindications. With one class, you couldn't even eat CHOCOLATE. What sort of punishment is that? Cruel and unusual is what it is.

So, yes, people are more likely to cop to depression, and also we have more time to think about how much we hate ourselves and how hard it is to fill that black hole in our hearts and stuff.

But I think I can point to two specific reasons Gen X is so depressed: Simon and Garfunkle, and Peanuts. Wait, is that three reasons?

My parents had a bunch of Simon and Garfunkle records and 8-tracks that were played quite often, especially on Sunday mornings and road trips. Mostly we think of S+G and being kind of happy, but listen to the lyrics. Not every song is "The 59th Street Bridge Song," ya know. Most are about loneliness. Some are about suicide. Even the rather sweet "America" contains the lyric, "Cathy, I'm lost, I said, although I knew she was sleeping." That just kills me every time. As a kid I thought he was lost on the road, like we often were. But somewhere inside I knew what it meant. And there's no subtlety in "Richard Cory." He shoots himself! Blammo! There's no metaphor to cover things up! And the singer works a miserable job in a factory. No one is happy in the S+G world.

Then there's Peanuts. Those little ragamuffins totally screwed us up. The football, the psychiatrist booth, the ugly tree... I can go on. In fact, I'm pretty sure I'm an atheist because of "It's the Great Pumpkin, Charlie Brown." Poor sap Linus waited ALL NIGHT in his very sincere pumpkin patch for that stupid demigod to show up. He could have at least sent a gourd in his place.

I know, I hardly ever make any public entries any more, but I'm super sick so I'm just gonna get it all out and even link it to my facebook, anti-privacy style.

I just clicked on a friend's link to his "appearance" on a podcast called something. Let's say it's, uh, The Super Unfunny Comedy HOUR on Audio and Yes You Will Listen To It Because I Said So Show. It's a long title, I know, but the show is an hour and it deserves a long title.

I listened to 10 minutes before I realized it was a whole hour long. A FREAKING HOUR. OF LISTENING. My friend was very very funny, but most of the 10 minutes were monopolized by the host who was let's say for the sake of brevity, "meh."

Jeebus, folks. I don't have an hour to LISTEN to something unless it's read by, i dunno, James Gandalfranakis or some such celebrity and had a goddam narrative arch. I surely don't want to listen to an hour of the guest never getting a word in. That said, the co-host has a very pretty laugh, like wind chimes on a spring evening. It made me think about my laugh, which is like an elderly fat man with pants up to his moobs falling in a pile of shark's teeth to which he is allergic and then has a sneezing fit resulting in the witnesses to the catastrophy being covered in emphysemic snot and phlegm with NYC soot and threads of blood mixing with the regular yellowgreen color.

Then I saw that the SUCHOAAYYWLTIBISS Show has a freaking BOOK out. ON AN ALMOST REAL GODDAM PUBLISHER.

I know, I'm getting like Ed Anger mad here but I got a fever (literally, not the "for the flava of a pringles" type) and waddya gonna do.

I'm sure some of you are like, "Meh, I like these people because I know them personally" and some may even be like "I enjoy this show and its inexplicably long running time and yes even the pseudo-archaicness of the radio experience via podcast." OK, fine. Others are probably like, "dude, man, do your own 10 minute show and stop complaining." I know, My CAT could do it, and people would listen. She'd have on local celebrities and friends and she'd let them talk a little but mostly she'd ask them to describe her incredible beauty and if they missed something she'd yell, "I'MA GONNA SMAKE YOU WITH MAGAPAWS." and then there would be laughter and applause.

And others are like, "Dude, man, we've been telling you for YEARS that you should write a book."

Yes, but all those things take work. OK???

I hated The Ask: http://www.hipsterbookclub.com/reviews/copy/0310/ask_sam_lipsyte.html

I didn't really like The Discreet Pleasures of Rejection: http://www.hipsterbookclub.com/reviews/copy/0310/discreet_pleasure_of_rejection_martin_page.html

I thought How To Build a Dinosaur was OK: http://www.hipsterbookclub.com/reviews/copy/0310/how_to_build_a_dinosaur_jack_horner.html

Once again, teh internets have shown that things happened before the internets, but we have forgotten.

Today I got an obnoxious email from a man from Kearny New Jersey whose profile picture shows a fat bald man on a motorcycle with painted with an American flag motif. His email said "LOL good luck". I'm guessing he was offended because I wouldn't shut up and make him a sandwich.

I just got an email on a dating site from a guy who calls himself internetpimp.

The state of Henrey is strong, but he has an infected molar.

Poor Hank. He's always had bad teeth. When I first picked him up off the street in 1998, his breath stunk to high heaven, but I didn't think about it. Four years later, a month after I got laid off from a job, Hank ran up to the bed with a bloody muzzle. He wrote about it here. It cost me over $2,000, but at the end his teeth were fewer, but the remaining ones were good.

He's had a few cleanings since then, the last one four years ago. Lately, he's been rubbing his jaw on everything, so I took him in to the vet today, and she told me that he's got an infected molar which probably has to come out. AWWW. Poor Hank! Guy just has bad teeth--it's not like he's on crystal meth or anything.

He's been eating crunchy food all through this, although he certainly has the choice not to--the cats here get both dry and canned. So I'm sure he'll be back to crunchy after the dentistry.

Another annoying problem w/r/t dating at my age--a lot of the guys who email me look like my dad. It's a combo of my father looking quite a bit younger than 67, and guys in their 50s looking older, and all having facial hair. I can't date my dad. I can't even date someone who looks my dad's age. How could I bring that person home to meet my parents? I mean, unless it was, I dunno, Locke from LOST. Someone famous.

I keep thinking that I can get a traditionally less desirable younger guy to date, like someone chubby or who doesn't want kids, or who still reads comix, or who mounts bugs at the American Museum of Natural History, but that hasn't worked yet. Really, I want to date Horatio Sanz or Jorge Garcia, because I think it would be awesomely funny to date a famous Chilean, and I think they're kinda cute because they look like me. Altho I know when Sanz gets older he's gonna look _exactly_ like my dad, and that will freak me out.

Being female, in your 40s, and single sucks.

I posted some personal ads on some online sites, and the responses I'm getting are terrible. On Chemistry, all of the men except ONE were conservative, "nonpartisan," or "other." I think we all know that nonpartisan and other means libertarian or tea party. Why would these guys even message me, unless they're just emailing every woman available in their area? And of course the liberal lived 400 miles away. Geek2Geek requires that you pay $$ to email people who don't email you first, so no one emails anyone.

Also, I know you guys claim that women always lie on their ads, but so far every man I've met has lied. Sometimes about weight (being obese does not make you "average"), but mostly about height. If a guy is 5'8", no way should I be taller than he is. I'm only 5'4"!

One guy who emailed me on OKC asked if he could borrow some books from me. NOT EVEN BOOKS I EVER SAID I HAD! He was just like "o hai, i want to read these books, can i borrow them from you?" Uh, no. That's what the library is for. He also only wanted to go to free things. He couldn't even afford a cup of coffee for himself!

At this age, men have so many more options, unless he's a dead ringer for Super Mario. A good looking smart guy my age can date someone like me, but why would he when he can date a 25 year old? or a 37 year old? Whereas his female equiv should settle for an aging Ron Jeremy look-alike.

I know I'm like totes super awesome and stuff, but these short fat mustachio'd conservative guys don't know that. 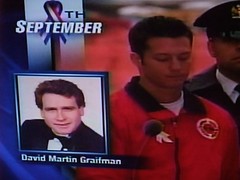 DSCF0362
Originally uploaded by mungo181
I put on the TV when I feel lonely, and when I put it on today all the channels were showing the 9/11 memorial service. Coincidentally, they had just begun the "H" names, so I tivo'd back to the "G' names see my friend David.

It's been 8 years. No doubt he would have some kids by now--he and his wife were in the process of buying a house when he died.

It made me sad to think about the life he didn't get to live.
Collapse